Last month, on July 18th, Chevy unveiled the mid-engine C8 Corvette. The Global Product Chief of GM, Mark Reuss, announced to the public that the new Corvette would start at less than $60,000 MSRP when it sees showrooms in late 2019. It is expected to be nearing the high $59,000 range before destination charges or other charges, which means that it should be just over $60,000 delivered and prepped for sale. 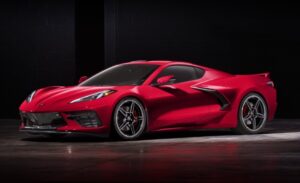 With the current C7 generation starting at $56,995 and having a nearly $2,000 destination charge, the C8 is a giant advancement above the C7, just with its engine placement. The C8 has a better interior, more power, a sub three second 0-60 time and more standard features. Not to mention, the C8 is a crazy deal for the price, just by comparing it to other vehicles in its class such as a base model Lamborghini Hurican which starts at $203,674. The Hurican makes 602hp where as the C8 makes 492hp, but is nearly 2.5x cheaper.

Clearly the $60,000 price is for a completely base model C8 with no options. I am betting that with options, the new C8 can get close or past the 6 figure marking, but even above 6 figures, the C8 is a bargain and really delivers.